Login to Complete an Application or to Access Reviewing Panel

Richard Angus Tapply, popularly known as "Wink," was born May 9, 1910, and grew up in New England. Educated in the public schools of Bristol, New Hampshire, he graduated from high school in 1928 as valedictorian of his class, and in 1929, attended Copley School of Art, Boston. Wink served in the U.S. Army from 1941- 1943. He married Ruth Manktelow in 1938, settling in Bristol, where they raised their two sons, Charles and Dick, until her death in 2001, and his, in 2005. Because of his leadership ability, his creative nature, his enthusiasm, and his love for people, Richard Tapply became a community leader in Bristol, particularly serving scout groups, service organizations, and his church, as well as a New Hampshire recreational leader, a consultant and inspiration to New England Recreation Communities, and sustained a deserved reputation as a fearless innovator and servant at the National Recreation level.

In 1946, Wink Tapply was the natural choice to direct Bristol's pioneer church-community program of recreation. As Director of Recreation until 1956, he successfully administered this program, which soon became recognized nationally as an outstanding small community recreation service. The comprehensive program served not only Bristol, but six surrounding towns. Responsibilities included: planning and directing the remodeling of an old church building into an attractive and functional recreation center; planning and directing the development of playground areas and a 125-acre nature and conservation area; planning, administering and evaluating a comprehensive, area-wide program of activities at the recreation center, playgrounds, camping and nature areas, beach, and winter sports areas; organizing and advising an area-wide recreation council; directing fund-raising events; preparing annual budget and progress reports; purchasing equipment and supplies; and developing and directing an area-wide volunteer leadership corps.

Long before outdoor education and conservation were considered an important part of a municipal recreation program, he sponsored activities in both. His programs consisted of playground camping lessons, camping trips, camporees, family camping club, and annual family camporees. Together with outdoor living skills, campers were taught appreciation for and responsibility for their environment. Field trips for elementary school grades were a natural continuation of conservation instruction during the school year. 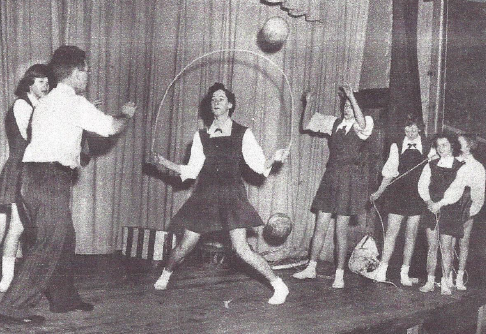 He developed and coached the first recreation department-sponsored rope skipping programs in New Hampshire. His Girls Rope Skipping Demonstration Troupe performed throughout the East for more than 100 organizations. Under his direction, they presented programs of rhythmic and acrobatic rope skipping at the National Recreation and Park Congress in Philadelphia in 1953, at the International Youth Folk Festival in Niagara Falls in 1953, and for President Eisenhower in 1954. In 1954, Mr. Tapply, with his wife, Ruth, implemented the first Santa's Village at the Bristol Community Center. In 2014, that beloved program celebrated its 60th year Anniversary at the renamed Tapply-Thompson Community Center, Bristol, New Hampshire.

When, in 1957, a private foundation made funds available for the National Recreation Association to employ a New Hampshire Recreation Consultant on a one-year basis, Mr. Tapply was selected for the position. The experimental program proved so successful that it continued, with support of the Foundation and the National Recreation Association, for eight years. In this position, he served New Hampshire cities and towns, private and public agencies, industries, schools, churches, and individuals in all phases of organizing and conducting leisure-time activities, published a newsletter, wrote and compiled
resource materials, and conducted leadership training workshops.

From January, 1965 to November, 1965, Mr. Tapply served as a Training Specialist for the National Recreation Society and conducted training workshops throughout the East, South, and Midwest. When recreation consultation service could no longer be supported financially by the  Foundation and the National Recreation Association, enthusiastic support from New
Hampshire communities persuaded the 1965 New Hampshire General Court to accept it as a government responsibility. Thus, the New Hampshire State Office of Community Recreation Service was established, and Mr. Tapply was appointed its first Director.  Responsibilities included: giving assistance on administration and financing; developing areas, facilities, and programs; and any other problems concerned with providing  recreational opportunities for citizens and visitors in New Hampshire. Duties also included conducting recreation leadership training workshops, publishing a regular newsletter,
writing manuals and resource papers, and making frequent speeches at conferences: his only assistance in the State Office was one secretary.

As Director of the Office of Community Recreation Service, Mr. Tapply worked closely with other agencies to offer the best help possible to his constituents, also serving as a recreation consultant to municipalities and private commercial recreation and park  agencies. The following examples verify his creative ability to originate and implement such cooperative services: he served as Program Director of the New Hampshire Recreation and Park Society to plan training meetings and workshops, and acted as resource consultant to this group of professional park and recreation administrators and leaders. To this Society and a select list of recreation committee members and persons interested in providing leisure-time activities in their communities, he sent a monthly bulletin of announcements, seasonal programs suggestions, and other items of local  interest.

Mr. Tapply initiated the PLAN FOR COOPERATION, an agreement with the Vermont State Recreation Division, to share resources, training sessions and other forms of  service to avoid duplication of effort and thereby conserve time and tax money. The Plan was revised in 1970 to include the State of Maine.

In an effort to inform members of recreation boards, commissions, councils, and other administrative groups in New Hampshire communities of their responsibilities and opportunities, Mr. Tapply planned and conducted a MOBILE RECREATION SCHOOL

Concerned with the need for higher professionalism in the field of Parks and Recreation in Northern New England, Mr. Tapply conducted an extensive survey of the status of recreation and park leadership in New Hampshire, Vermont and Maine, and after studying the results of the survey, proposed PROJECT FISH (Forward In Self Help), a 14-point program of self­ improvement. Project FISH was implemented and conducted for one year under the guidance of Mr. Tapply and a special committee from the New Hampshire Recreation and Park Society.

To make training available for activity directors in nursing homes, he set up a cooperative plan with the Medical Care Division of the State Department of Health in Connecticut

Mr. Tapply was a leader in providing for the sport of bicycling. Recognizing the potential of this safe, enjoyable and fast-growing sport, he worked closely with the American Youth Hostels to develop, in 1972, a manual, BICYCLING IN NEW HAMPSHIRE. Popularity of this resource has justified its publication: 10,000 manuals were distributed to bicyclists in at least 40 states and several foreign countries. He assisted with a bicycle survey to secure information for the New Hampshire Governor's Trail Committee in 1973. In the same year he conducted an educational session at the New England District Recreation and Park Conference on "How to Meet the Needs of 100 Million Bike Riders." The 1973 General Court appointed Mr. Tapply Chairman of an Implementation Committee to establish a system of bike routes in New Hampshire, and to compile, edit and revise the original manual mentioned above.

In June 1974, cooperation with the New Hampshire Division of State Parks made possible a free-use plan of state park facilities to municipal recreation departments, certain other agencies, and senior citizen groups.

The most popular publication to serve recreators was RECREATION IN NEW HAMPSHIRE, a newsletter distributed to a mailing list of 900 readers (See Exhibit #12). In cooperation with Maine and Vermont, one issue each year was devoted to "Recreation in Northern New England".

Mr. Tapply retired from his position as Director of the New Hampshire State Office of Community Recreation Service in September, 1975. He continued service to the recreation and park field as a consultant. In this capacity he served as instructor for the International City Managers Association correspondence course in Managing Municipal Leisure Services; conducted sessions on Innovative Programming for the National
Recreation and Park Association; and assisted several local communities to establish and maintain departments of recreation and park services.